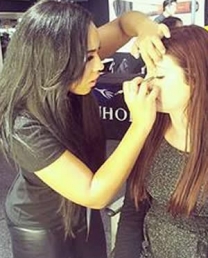 Tara Kathrada has been a hair and makeup artist in the industry for 10 years.

Tara completed a Diploma in Fashion and Photographic Makeup at the Professional Makeup School in Cape Town, South Africa. Since then Tara has also kept with the trends by completing a Certificate 4 in Hair and Makeup with The Academy of Makeup in Paddington, Sydney Australia.

Previously based in Sydney her experiences include working on some of Australia’s top television shows such as The Bachelor, The Bachelorette, MKR and many more as well as Fashion and Advertising campaigns.