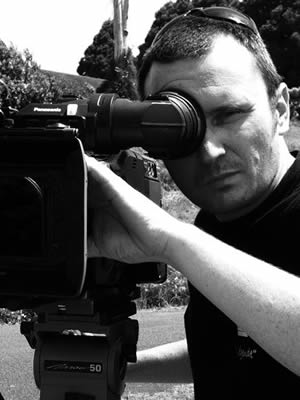 With over 20 years’ of broadcast experience and an extensive high profile client list, Joseph Ward has developed a reputation for providing high quality and innovative filming and production services. He’s been nicknamed the “swiss army knife” of production due to his wide range of skills and exceptional competency..

With 20 years’ of equipment gathering, Joe has pretty much everything needed for your production, the main tools of course being the cameras which include:

Since the advent of Panasonic’s P2 HD cameras in 2006, Joe has remained ahead of the curve in the use and efficient workflows of solid state cameras including Sony SxS, Panasonic P2, Red, Arri and Blackmagic. Joe takes pride and effort in keeping up with the latest in technical advancements in conjunction with highly developed aesthetics to create innovative solutions and looks for your next project.

To this end, Joe has also become expert in the field of Livestreaming and has completed projects for clients such as Facebook, Harley Davidson, SBS TV, the United Nations and Sydney Fashion Week. With the capability to provide full service outside broadcast production, from 1 up to 6 cameras + unlimited virtual inputs, talk to Joe about your next live webcast project.

As an avid cyclist and motorcyclist, shooting cycling and other events from a motorcycle has been a natural extension of Joe’s shooting skill set. I’ve worked on most of the biggest events in the country including:

Joe also has a motorcycle modified for production shooting, with footplates, microwave link transmitter pole and Autocom comms system. Can provide an experienced moto pilot, as well as two more motos similarly equipped/crewed. While shooting handheld on the moto produces great coverage, we can also use a mounted Ronin gimbal with the Sony F5 for truly spectacular results!