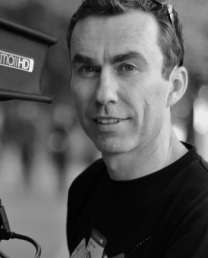 Ewen Allport is a Melbourne based freelance DOP/Lighting cameraman and Licensed Drone Operator.

Beginning his career in one of Australia largest camera rental houses Lemac Film and Video, working across the business in both Sydney and Melbourne as rentals manager, client contact and camera assistant to the late John Bowring. Ewen then moved to London and worked for Chilli TV on the world surfing tour before returning home and joining Network Ten as a cameraman, editor and sound recordist for over 8 years.

Since beginning his freelance career back in 2011 Ewen has been working across a range of productions including TV Series, TVCs, Doco, Sport and Corporate videos. He has worked both internationally and right across Australia for all the major television networks in Australia, Foxsports and international clients including National Geographic US, History Channel US and NHK Japan. His corporate clients have included Telstra, Origin Energy, ANZ, Westpac, NAB, Grand Prix Corporation, Jetstar, Cricket Australia, Red Cross Blood Service, Vic Department of Education, TAC, Caltex, AFL, Salvation Army, Life Saving Victoria and many more.